Because I wanted to play a game on national televison.

Where's Wally? is a series of children's puzzle books. Readers are challenged to find a character named Wally hidden in the group. I've always been a fan of Wally and even named my dog after a joke related to Wally (but that's a different story).

So a few years back I saw this red-white sweater and got an idea. I was going to play Where's Wally? Together with my Facebook friends. On national television.

After obtaining tickets for De Wereld Draait Door (a well watched Dutch TV show) I put everything in motion. With a post on Facebook I tried to trigger my friends, and to make sure I looked the part, I bought a matching hat, glasses and walking stick. 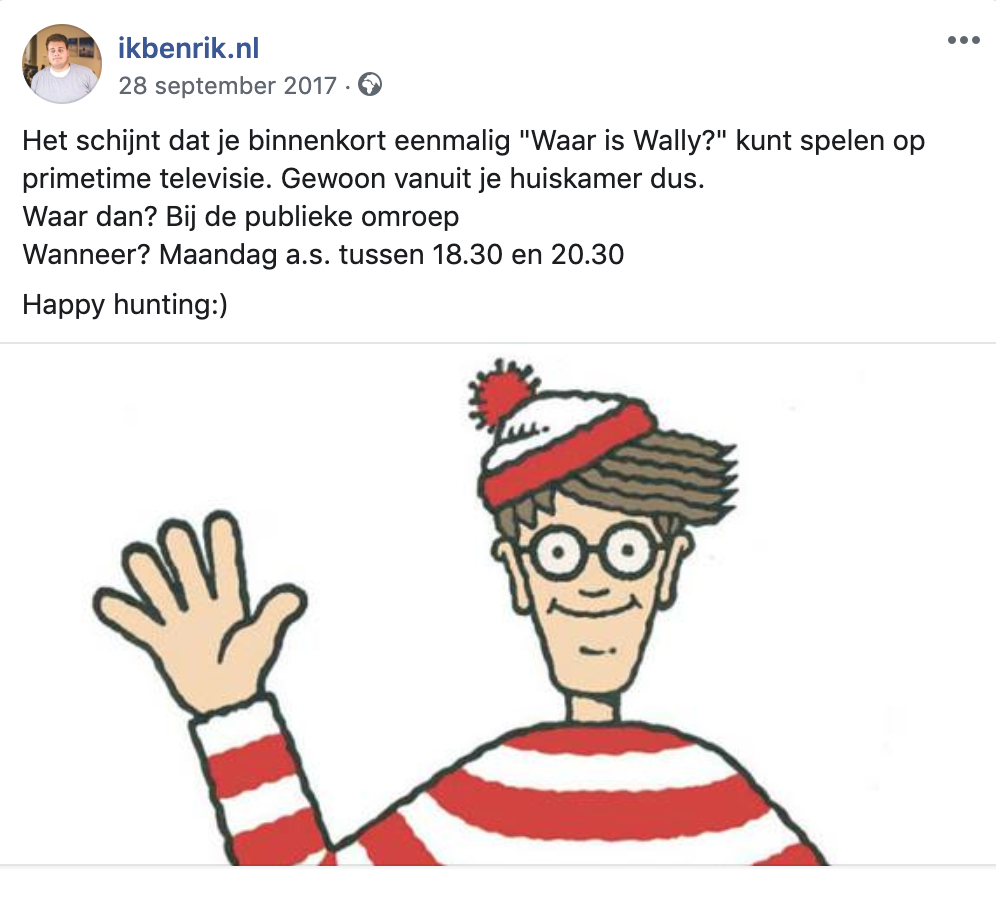 A week later it was time to go to the studio. While I got most things planned, I had not decided if I was going to inform the people from De Wereld Draait Door that I was going to use their show for my little joke. Telling them would increase my chances on a good spot but also increased my chances of not getting in at all. (Production leaders are a certain breed of human, the kind that neuroticly arranges little detail and doesn't like surprises.)

Once I got there, people started looking at me and my ridiculous outfit. I quickly decided that the chances of me getting in were small and that my best bet to get in and get a good seat was to just tell them. (For those that never went to TV-recording; everyone in the audience gets a spot based on their clothes and how pretty they are. Because television still is a picture perfect world.)

So 10 minutes before people were allowed in I reached out to production. Explaining my plan I asked them if they could put me in a spot that was quite often in the picture, but not too prominent (it needed to stay a challenge ofcourse).

I got lucky, the production leader was also a fan of Waldo, and he liked the stunt. That's why he agreed on letting me in with the sweater and promised to put me in a god spot if I promised to:
1. never speak about him coöperating, because he didn't want to get flooded in the future with weird requests (Oops, just did. Sorry!)
2. lose my hat, fake glasses and stick. (In hindsight I am actually glad they made me hand it over since the temperature in the studio was 90000 degrees, not the ideal place for a wintersweater let alone a hat).

After I handed him my accesories and more or less promised the other thing, I got placed in the perfect spot. Click below to see the result.